“The final target of business is not profit”

thuhuongfashion
Thu huong Fashion Production & Tranding Co.,Ltd“The final target of business is not profit”It is Ms. Thu Huong - Director of the company’s confidence about her profession. Perhaps we will wonder what she considers the key factor if she does not suppose that it is profit. Listen and sharing with h...

“The final target of business is not profit”

It is Ms. Thu Huong - Director of the company’s confidence about her profession. Perhaps we will wonder what she considers the key factor if she does not suppose that it is profit. Listen and sharing with het the indulgence of fashion, I suddenly remember a famous saying: “Value of life is not measured by year of money accumulation but by what we give and get.” Through her honest, simple way of thinking, I feel a pure heart. She says: “To have customers belief is to have everything!”.

Firstly, Fashion must be beautiful

With that conception, every product is appropriately invested following strict standards from the input materials to end-products. Traveling around the company and its showrooms, enjoying products that Thu Huong made for domestic as well as foreign partners – events clothes for ACE Life, Coca Cola, Motorola, Kotex, Debon,…. We can see professional style of Thu Huong. Each product Expresses different nuance containing the trade names specific characteristics with youthful, active styles through harmonious color combination simple but impressive designs…

She thinks:  “I used to be a tailor and I respect that foundation. Thereto, now when the factory developed into company, I always remind me that I have no right to deny customers. Although it’s just a small order form with one or two products only, we also work seriously ensuring accuracy of time and suitable prices…”. For patience, laboriousness and noble spirit when she values clients’ right above profits; the company step by step proves it’s rank among so many trade names in Ho Chi Minh City as now. It seems that there’s something hidden behind her saying. Talking about business, people often discuss proceeds and gains. And she proudly explained:” I’m a lucky person since I do the work I love, getting customers’ affection and having marvelous partners. I personally think that it’s enough!”. Instead of aiming at enlargement of business scale and accepting all orders, Thu Huong deeply understands that prestige is the most important thing to deny immediate interests to keep it’s image and prestige in clients’ hearts. She shares: “This time Thu Huong has widen production capacity enlarging the office to include functions of showroom and direct sales. This period, the company strategy is to remain all functions but not do a lot. We want to save time for each product to remain prestige with clients”.

Thu Huong was officially found in June 2006 with different function such as sewing uniform, event clothing; embroidering; design and masquerading. Stating the work from a small tailor shop, none better than her, she understands the value of work to sympathize with the partners and employees. Unlike other directors that I contacted, she lives in harmony with her employees and creates a very warm, familiar feeling for the others. Some employees have gotten along with Thu Huong for over 10 year from the difficult days until now. There’s no any gap between the director and her employees, they share every concern in work as well as in daily life . She says: “To give is to get. I believe my employees. Remember the regulation: To arouse creativity and devotion, the director has to sow the seeds of belief”.

I think that it is the best premise for customers to accompany with Thu Huong, as what she judges: “Good wine needs no bush “. On the road of making the dream become true, maybe they will still face with a lot of challenges, yet I believe that for client’s love and collective strength, Thu Huong will go further on the way of winning client’s hearts. 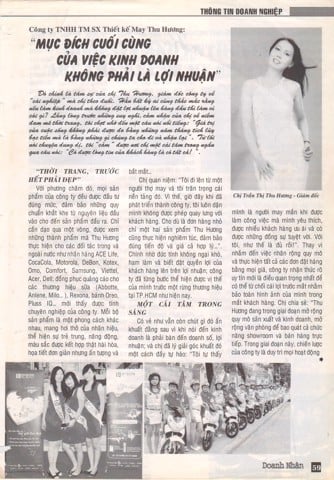 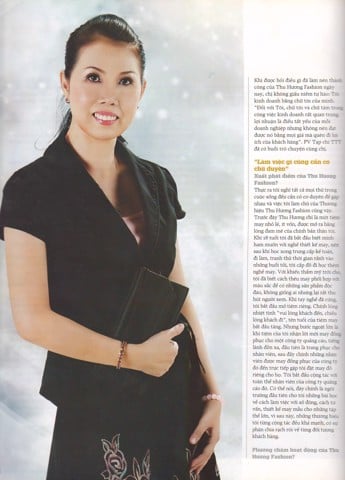 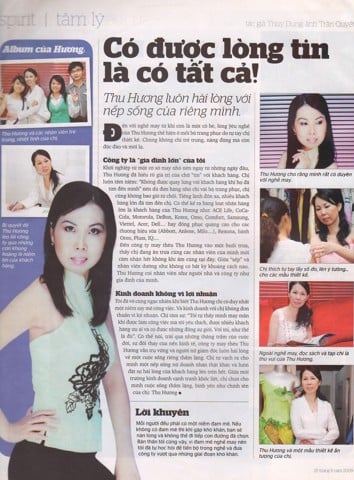